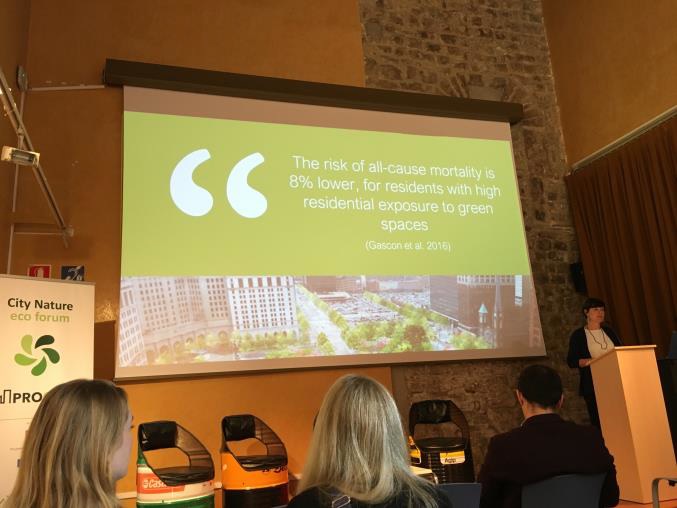 By Jens Lindgaard and Cecilie B. Andersen (University of Copenhagen)

The second day of the PROGRESS conference in Barcelona was a conference with subjects ranging from green planning to concrete examples on landscapes in the urban environment. Presentations concerned strategic planning, health issues in the city, smart water management and biodiversity in urban nature. Every speech was followed up by discussions and questions from the audience, answered by the panel of the speakers. Here we will reflect on the first theme from the day.

The first keynote speaker was Dr. Isabelle Anguelovski. She has researched urban planning, social equality and health issues and connections between them.

In our background as urban landscape engineers, we are used to seeing green spaces as solutions to many issues in the city. Isabelle challenged this thinking by reminding us green spaces are not always seen as a positive thing by all citizens. Indeed some people may relate green areas to an early negative experience in their childhood. Also green Spaces can be associated with insecurity. An example of this is the usage of parks by drug dealers and other criminals, especially during night. This therefore underlines the importance of working with creating space for healthy and great outdoor experience in the early years of our life.

This theme was represented in the next session where the 3 professors – Wilma Zijlema, Hans Keune and Laurent Bray – held a panel debate about urban transitions, public health and nature in cities.

In this debate, Hans provoked the audience by providing some contrast. He started a discussion about how green spaces and health issues suffer from a lack of mutual understanding in interdisciplinary work. His argument was that ecosystem services and public health derives from two different approaches which are normally seen as two separated sectors: where urban planners work toward preventing health issues by creating healthy environments, the health sector works toward curing the problems after they have appeared. His point was that if we want green liveable cities, it is necessary to bridge the professions. And not only between the environmental and public health sectors but also between politicians, the housing sector and so on.

Nantes in France was mentioned as a good example in this regard. Here the politicians have worked together with the planners on a goal since the 80’s, which has resulted in 35% social housing being build in all new neighbourhoods. Involvement of the citizens and a focus on the peoples’ needs is the central strategy when the city expands or new green areas are landscaped. This approach has result in a very diverse city without the common fragmentation known from similar metropolitan areas.

This leads us to some of the conclusions, which we will bring home with us and on into our future work. Firstly, that early outdoor experiences in our childhood are prerequisite for nature to play a role as a health improving element in our daily life as grownups. Secondly, that the involvement of citizens therefore is key to the understanding of the situation and needs in a specific case. Lastly, and most importantly, urban transition towards greener, socially equal and healthy cities is an interdisciplinary issue, and has to be treated as such.